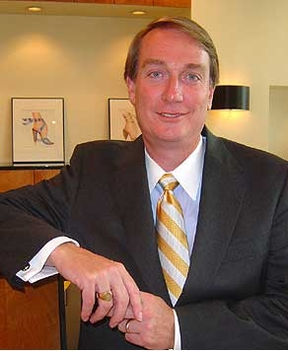 He held two positions: acting president of Zurich Direct where he provided strategic and operational leadership to the business division that distributed term life insurance direct-to-consumers and as executive vice president of corporate development where he was responsible for the organization's marketing, communications, strategic planning, market research, human resources, professional development and facilities functions.  It was in this role that Ned developed the overall brand structure for Zurich Life and represented the U.S. marketplace in the development of Zurich's global brand structure and architecture.

An honors graduate of The College of Wooster, Ned holds a Masters of Science with distinction in advertising from Northwestern University's Medill School of Journalism where he was Arthur E. Tathum Scholar in Advertising.

Edward (Ned) K. Loughridge is president of Caledonia Marketing LLC.  He leads a cadre of some of Chicagoland's most talented marketers, communicators, writers and designers specifically chosen for their fit for a client's particular marketing challenge.  Each has significant client or agency experience with some of the world's best known brands.

Prior to founding the firm Ned was president of Globe Marketing Partners, Ltd. and spent nearly 30 years in the insurance industry, the majority of which were with Zurich Financial Services and Kemper in a number of marketing, general management and executive positions.​ His most recent positions with Zurich were with its U.S. life insurance operation, Zurich Life.